22 Kids Podcasts, Audiobooks, & Music for Earth Day - or Any Day 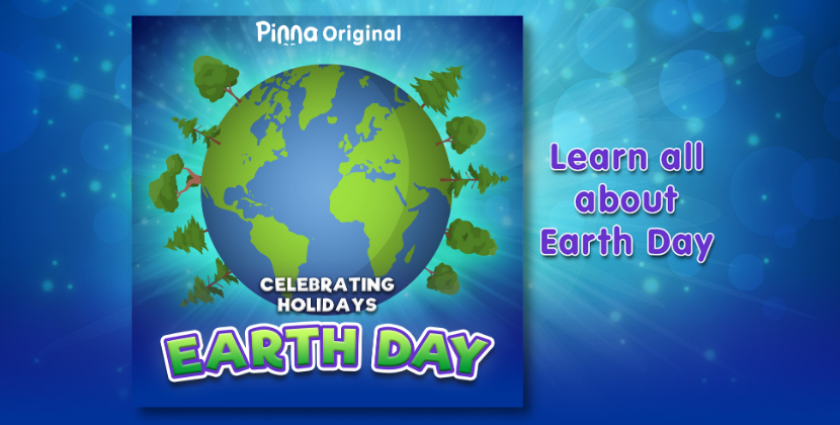 From animals, plants, and ecosystems to environmental change, conservation, and notable environmentalists, there are so many topics related to our environment that are important to explore with kids - and Earth Day, on April 22nd, is as great a time as any!

22 podcasts, audiobooks, and music for kids 3-12 that celebrate earth and nature

Check out our curated playlist perfect for Earth Day and beyond.

Discover the Forest through the eyes and ears of the Velez family as they visit various parks, forests, trails, and mountains. Whether they're exploring by canoes in the Mangroves, or hiking up the Appalachian trail in the Blue Ridge Mountains, the Velez family is always enjoying a natural wonder.

Coming to you straight form the garage recording studio, Kyle brings you animal trivia, games and interviews with the most special species of the animal kingdom. Guests on the pod include superstars like Cheetah, Dolphin, and Komodo Dragon. Every episode also features field reporter and friend, Gail as she visits animal habitats all over the world.
Parents' Choice Approved

Inspire your kids through the lives of accomplished women! From artists to athletes, and scientists to spies, each episode features a different, and fascinating, world-changing woman. To hear about the women making a difference as environmentalists and conservationists, have a listen to Wangari Maathai read by Melinda Gates (S1E10), Katia Krafft ready by Maeve Boeve (S2E11), Junko Tabei read by Kit DesLauriers (S3E1), Greta Thunberg read by Jameela Jamil (S3E4), and Jane Goodall read by Cristina Mittermeier (S3E10).

Ever wonder how volcanoes erupt, why the ocean is salty, or what causes thunder? Each episode of Brains On! will answer some of your most burning questions. Satisfy your curiosity one topic at a time!

Radiolab, one of the most beloved podcasts in the world, reaches into its archives to create Radiolab for Kids. It's a place where they've collected Radiolab's most family-friendly content. Check out topics about mosquitos, birds, and more!

Earth Day is a call to be “green.” This means thinking like a conservationist about everything from what grocery bag to use to what type of transportation to take. Elementary students just might be inspired to clean up a park or plant a tree after listening.

9. The Magic School Bus and the Climate Challenge

Like it or not, global warming is a hot topic, and it will affect the younger generation the most. So why not turn to the teacher kids like the most, Ms. Frizzle! Only the Friz can boil all the hoopla down to the scientific facts in a fun and informative way - engaging kids and empowering all!

10. The Magic School Bus Inside the Earth

Rock collecting has never been quite like this! When the class forgets to do its homework, a fieldtrip through the Earth's crust, into the center of the Earth, and out through a volcano will teach them not to forget their assignments again - and then some!

11. The Magic School Bus on the Ocean Floor

When Ms. Frizzle drives the Magic School Bus full speed ahead into the ocean, the class takes a submarine expedition that's anything but ordinary. With a well-meaning lifeguard in tow, the class takes a deep breath and learns about hot water vents, coral reefs, plant and animal life on the ocean floor, and more!

The cool story of volcanoes will intrigue kids and adults alike. Hot melted rock from the middle of our planet forces its way up through cracks in the Earth's crusts, exploding violently and sometimes unexpectedly in volcanic fury that can terrorize populations for months, even years. Anne Schreiber's narrative gives readers a little of the science, a little of the history, and a lot of the action.

Storms are SCARY! But it's cool to understand what's going on when Mother Nature gets angry. Why does the wind howl? Why does it rain for days? How do rivers overflow? Thunder and lightening, monsoons, hurricanes, tornadoes... the facts will blow you away!

Ants are everywhere. They creep, they crawl, they climb, and they fall. But they get up and they keep on working. Ants come in all different shapes, different sizes, and different colors. And they do a lot of different jobs. These hard-working little creatures thrive wherever they go, making whatever adaptations necessary in their ever-changing world.

15. I Survived the Destruction of Pompeii, AD 79

No one in the bustling city of Pompeii worries when the ground trembles beneath their feet. But Marcus is afraid…and when Vesuvius explodes into a cloud of fiery ash and rocks fall from the sky like rain, will he have time to escape?

Dexter has always wanted to see a tornado. So when he gets the incredible opportunity to go storm chasing, he has to say yes! This one isn't heading toward his hometown of Joplin…but when the tornado shifts direction, Dexter's bravery is about to get tested....

Leo loves being a newsboy in San Francisco. But early one spring morning, everything changes. Leo's world is shaken – literally – and he finds himself stranded in the middle of San Francisco as it crumbles and burns to the ground.

Eleven-year-old Japanese-American Owen has been in Japan for his sixth-grade year. By March, he finally feels like he's getting the hang of the new culture. But one morning, everything changes – and Owen suddenly finds himself just trying to survive one of history's most devastating disasters.

Eleven-year-old John is about to experience one of the deadliest blizzards in American history. The storm of 1888 was a monster, a frozen hurricane that slammed into America's midwest without warning. Within hours, America's prairie would be buried under ten feet of snow, and hundreds would be dead.

Eleven-year-old Sally Tanner finds herself in the middle of the deadliest volcanic eruption in U.S. history. Trapped on the mountain, she must escape clouds of poisonous gas, boiling rivers, and landslides of rock, glacial ice, and white-hot debris.

It’s the end of August 2005, and a big hurricane is blowing in to New Orleans. Barry’s family plans to evacuate with everyone else, but when Barry’s little sister gets violently ill, they must return to their home and stick out the storm.

22. Farmer Will Allen and the Growing Table

A former basketball star, Farmer Will Allen is an innovator, educator, and community builder. When he looked at an abandoned city lot he saw a huge table, big enough to feed the whole world. With clear and lively text and bright, engaging illustrations, this inspiring story of his determination to bring good food to every table inspires as it informs.