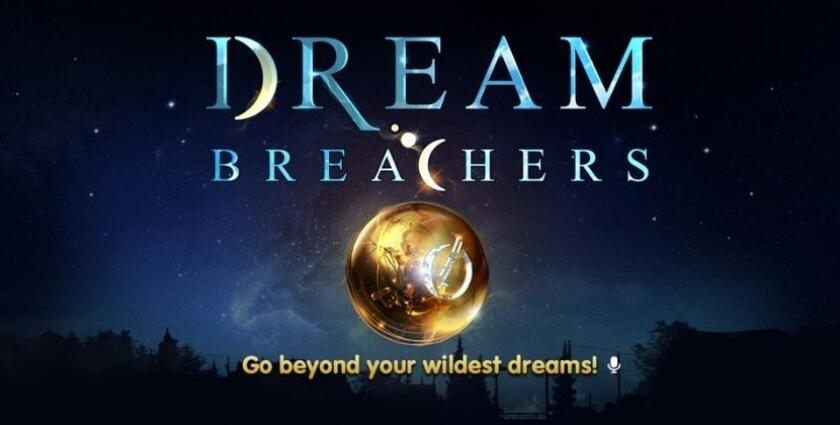 When I first started trying to think of podcast ideas to pitch to Pinna, I did what any writer would do and poked around on my computer for old, half-baked ideas. Turned out, I had a lot of them. A paragraph there, a page there, sometimes a chapter or two toward a book, here and there the beginnings of a short story or screenplays. My hard drive was a vast landscape of unformed story ideas that hadn't found a path into actual existence yet.

One idea in particular—DREAM BREACHERS—seemed to raise its hand and wave it wildly, screaming "Oooh! Oooh! Pick me! Pick me!"

I had a killer pitch sentence—"When a 12-year-old boy discovers his ability to move consciously between his dreams and reality, he quickly finds himself living a nightmare"— and not much else. I’d typed up maybe two paragraphs the same morning that my daughter came down for breakfast and said she’d dreamed she’d gotten a dog and wished she could have woken up with it. But it was immediately clear to me that a story involving dreams—which meant limitless soundscapes—would work well in a scripted audio format.

Some stories demand deliberate, thoughtful narrators. Some seem to beg for lush descriptive prose. But DREAM BREACHERS, which I'd maybe been thinking of as a middle-grade novel, seemed to be screaming at me that it wanted to be heard and not read.

I pitched it to Pinna and they also saw its audio potential and we got to work.

Writing a story that is entirely heard is not easy. Especially if, like me, you're a novelist who likes thoughtful narrators and lush prose. But it quickly became obvious that, yes, bringing this story to audio was going to be a ton of work, but it was also going to be a ton of fun. I started a list of settings with cool soundscapes—baseball fields and shipwrecks and carnivals—and let them work their way into the plot. I started listening more keenly at home and in the world, noting what a conversation feels like in a car (or car wash!) versus outdoors. The desire to constantly bring new sounds to the listener at home drove the story forward in ways I'd never anticipated.

It’s possible that I would have eventually pulled the Dream Breacher pitch off my computer and written it as a novel. But letting the sounds of the story help lead the way in its creation was the most fun I’ve had as a writer in a long time. The only part of the process that has been more fun than writing the episodes has been listening to them once our amazing sound designer and actors worked their own magic. There are scenes and sound effects that make me gasp, give me chills, make me want to cry. It’s such an exhilarating listen that I sometimes wonder if I’ll ever write a novel again.

To read some of Tara Altebrando's acclaimed middle-grade and Young Adult (YA) novels, we recommend starting with these:

Take Me With You

Eden, Eli, Marwan, and Ilanka barely know each other beyond having a class or two together. But when they are all summoned via messaging app to an empty classroom after school, they find a small cube sitting on a desk. Its sides light up with rules for them:

Do not tell anyone about the device. Never leave the device unattended. And then, Take me with you . . . or else.

At first they think it's some kind of prank or a social experiment orchestrated by the school administration. Still, they follow its instructions until the newly-formed group starts to splinter. Nobody has time for these games--their lives are complicated enough. But the device seems increasingly invested in the private details of their lives. And disobeying its rules has scary--even life-threatening--consequences . . .

Eleven years ago, six kindergartners went missing without a trace. After all that time, the people left behind moved on, or tried to.

Until today. Today five of those kids return. They’re sixteen, and they are . . . fine. Scarlett comes home and finds a mom she barely recognizes, and doesn't really recognize the person she's supposed to be, either. But she thinks she remembers Lucas. Lucas remembers Scarlett, too, except they’re entirely unable to recall where they’ve been or what happened to them. Neither of them remember the sixth victim, Max--the only one who hasn’t come back. Which leaves Max's sister, Avery, wanting answers. She wants to find her brother--dead or alive--and isn’t buying this whole memory-loss story. But as details of the disappearance begin to unfold, no one is prepared for the truth.

The Battle for Darcy Lane

Coming soon to Pinna! It is summertime, and twelve-year-old Julia Richards cannot stand the anticipation. Everyone on Darcy Lane seems to be holding their breath waiting for the cicadas to emerge, but what Julia and her best friend, Taylor, want is some real excitement. Which arrives in the form of a new neighbor named Alyssa, who introduces a ball game called Russia . . . and an unwelcome level of BFF rivalry.

Suddenly nothing stands unchallenged-not Julia's friendships, her crush, or her independence. But while Julia realizes that she cannot control all the changes in her life, she hangs onto the hope that everything will go in her favor if she can just win one magnificent showdown.

My Life in Dioramas

Coming soon to Pinna! Kate Marino knows very well that home is where her heart is, and if she had any say in the matter, her heart would stay put in Big Red. The old, rambling farmhouse has withstood the test of time with her family, but now Kate's parents have decided to sell it from under her feet.

The preventative solution: sabotage the realtor's tours with the help of best friends and a plan that has maximum stinkage potential. The back-up plan: hang on to at least a little bit of life at Big Red by creating shoebox dioramas of each room. But even with a full-scale assault, will her mission be a success? And if not, what will the diorama of Kate's future look like?

Tara Altebrando is the author of more than a dozen novels for children and adults, including the YA novels The Leaving and Take Me With You, and the middle-grade novels The Battle of Darcy Lane and My Life in Dioramas. She lives in Queens with her husband, two daughters, and a dog that did not come from the world of dreams.