Bringing Dreams to Life: Behind the Scenes of Dream Breachers 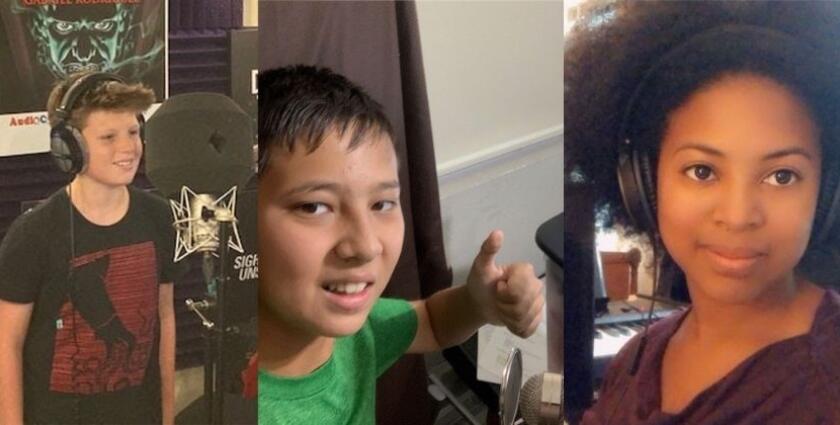 What does a dream sound like? More specifically, what does it sound like in that moment when you transition from the waking world to the dream world? Oh, and what does an arcade game with angry lions and upset elephants sound like? How about magically transforming a tightrope into a volleyball court?

These were only some of the questions we had to answer when making Dream Breachers, the recently launched Pinna Original podcast created and written by Tara Altebrando. The process of bringing the podcast to “life” wasn’t easy as we experimented with binaural recording, played around with thousands upon thousands of sound effects, and collaborated with over 40 actors – all during a global pandemic.

We are Dagaz Media, producers of Dream Breachers and a team that loves creating immersive stories for sound.

When Pinna approached us for the project, we were super excited to work with them and for the level of story craft they wanted to bring to audio products. Dagaz co-founder, and Dream Breachers director, Fred Greenhalgh has two young kids (4 and 8) who are both avid Pinna listeners, and our other co-founder Bill Dufris (who has sadly passed), best known as the voice of Bob the Builder, quickly signed on. While Bill was taken by cancer before we finished season one, his creative approach to storytelling, upbeat nature, and vision for building a three-dimensional sonic world created a lasting impression on the project.

When we first see an audio script, really what we see is a blueprint to a story world. Having a passion for audio storytelling means you start to see that world come alive in your head, but the challenge is to try and assemble the right team members that can build that world based on your vision. It’s not unlike a general contractor, who takes the work of an architect and then needs a team of skilled tradespeople to coordinate all the aspects that go into building a house. Only, instead of carpenters, plumbers, and electricians, we work with actors, production crew, audio engineers, sound designers, and composers to build our world.

Once we have a team in place, we start analyzing the script and digging into the details. We start asking pointed questions like: what kind of games does this arcade have in it? What songs might be playing in this character’s home during suppertime? What kind of school do these kids go to? What cars do their parents drive?

This obsession with detail is what makes a story world feel truly fleshed out and alive, and is what makes this art form so exciting for us.

Creating a distinction between the “real” world and the “dream” world with nothing but audio cues proved to be another piece of the puzzle we had to solve for. We ultimately decided to go for two different ‘sounds’ to accomplish the feeling of the dream world being separate from the real world. The real world would have a standard stereo mix, similar to what you hear in most realistic podcasts, whereas the dream world would have a binaural 3d sound environment - sort of like surround sound, but for headphones. Binaural mixing gives a sense of sounds moving all around, behind, above, and below you, enhancing the story’s fantastical elements.

Dream Breachers was slated to begin production in the spring of 2020, but in February, as COVID-19 started getting serious, we had our first conversations about whether that would affect our schedule. Over the next months, we at Dagaz Media, like so many people in the creative arts, figured out how to keep creating work in a radically changed environment.

We are used to extremely collaborative and intimate recording in a studio environment. What this means, is that often all the actors are in the same room together, including the Director. That’s usually around 4 to 6 people, but can be upwards of 8, especially when we have big group scenes, say when we’re trying to record a crowd cheering at a baseball game or romping around a carnival. Clearly, with the health concerns of the pandemic, this was 100% not possible.

We learned rather quickly that there was a cool opportunity in all of this, in that we could now collaborate with voice actors across the globe and not be constrained by people who could physically travel to our studio in Maine.

After conducting a broad casting call, we ultimately ended with a cast that included people in Oregon, Texas, Massachusetts, Florida, New York, even the Netherlands! While many audio shows may have just a single hosts or a few performers, Dream Breachers’s large and diverse cast of 40 voice actors helped us build a living and breathing world.

To make our physical studio safe in a Covid environment, we reconfigured the building to accommodate 4 isolated booths rather than utilize our existing large performance room. Actors could hear each other over headphones (including the remote performers) and so despite not being in the same physical space, everyone was able to perform together.

While new to us, the results were great. A particular highlight is a dinnertime scene where Evan visits his friend Marco’s house -- the family members were assembled in three states and as many time zones! -- and yet, when the scene plays through, it feels seamless and lively.

When people ask us what we do, what we really say is “We’re a bunch of grownups who get together to play make-believe.” To really convey that sense of fun in finished work, you need to feel it in the process of creating it, and with Dream Breachers, it was very true.

We all rooted for Evan in his journey to conquer his fears, cracked jokes at the arcade, gasped when strange things happened at the fairgrounds. Our post-production team spent mad hours into the middle of the night perfecting dramatic moments of the score, or fiddling with a sound effect so it would be just right.

We hope you appreciate our crazy obsession with sonic details - and make sure to listen more than once, with good headphones on, to enjoy it all!

Audio pioneer Fred Greenhalgh is best known for bringing location-recording techniques from his indie film background to the production of immersive audio movies. He's worked with Tatiana Maslany, Haley Joel Osment, Joe Hill, Stephen King, David Duchovny, Gillian Anderson, Kate Mulgrew, Zachary Quinto, and numerous others. He and his family live in an off-grid home in rural Maine that he and his wife built. They have many goats.