A sit down with Ron Roy on all things A to Z Mysteries! 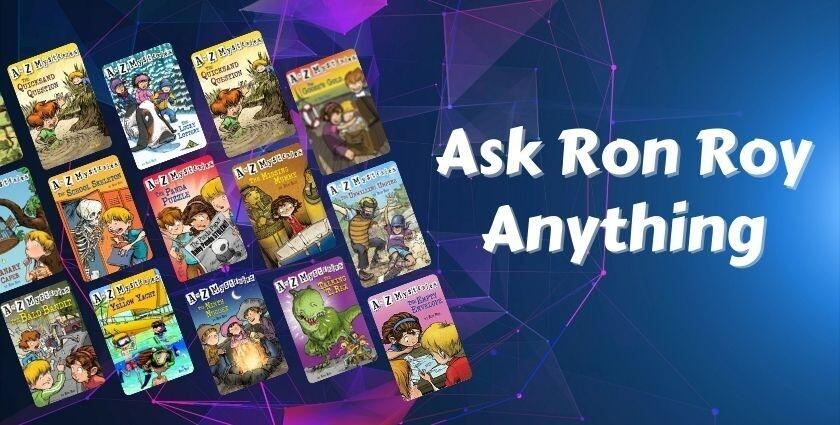 Season 3 of A to Z Mysteries: Clue Club is premiering soon — August 5th, to be exact!

As a fun treat ahead of the new season, we wanted to bring you an exclusive interview with Ron Roy, author of the A to Z Mysteries book series that inspired the podcast show.

Pinna asked for listeners to chime in with questions...and you guys came through!

Maxine Wanderer — Ruth Rose, on the show — hosted a virtual sit-down with Ron Roy where he answered questions that came in from kids all over the country.

It was such an engaging interview, we thought we’d share a snippet of the Q&A here on the blog.

Maxine: Hi everyone, I'm Maxine Wanderer. I play Ruth Rose on the Pinna Original podcast, A to Z Mysteries: Clue Club, which is based on the awesome book series by Ron Roy. I'm excited to be here with Ron Roy, himself. He’s going to answer some of your burning questions about all things A to Z Mysteries.

Maxine: We got a lot of questions about how you come up with the mysteries and we thought that may be a good place to start.

Elliott: How do you get the ideas for your mystery stories?

Maddox: How do you come up with the mysteries you write?

Ron Roy: I do a lot of reading and I get ideas from the books I read. And I do a lot of traveling and also I get ideas when I'm on the road or in foreign countries. But most of my ideas come from the kids who write to me who are reading my books. For example, one one girl wrote to me years ago and said, “Your series is great, but you need some more animals.” So I introduced Josh’s dog, Pal. And that was one example where I got an idea from one of my readers. Kids, keep on sending me your ideas — I love them!

Maxine: That's awesome! Some of our other listeners want to know if any of your mysteries are based on real life events.

Brennan: Are your mysteries based on real life?

Tahlia: Are the mysteries based on real case files?

Ron Roy: No, most of my mysteries are made up right in my brain. But a few of them are based on real life events. When I was a teenager, there was a bank robbery in my town near Green Lawn, Connecticut — where I grew up — and I used that bank robbery in one of my stories. I think it was actually The Bald Bandit. But, no most of my ideas are made up by me. They're totally fictional.

Maxine: Cool! Peggy, who's 9, wants to know how you started writing these stories.

Peggy: How did you start working on the A to Z Mysteries?

Ron Roy: How did I start the A to Z Mysteries? Well, I had an idea about an author who got kidnapped and I turned that idea into a book called The Absent Author. In the process of writing it, I decided that I liked Dink, Josh, and Ruth Rose as friends. I decided to try a second book using those characters so I wrote The Bald Bandit. Then I thought, “Oh my goodness, I've got an ‘A’ book and I've got a ‘B’ book.” That led me to think I could write The Canary Caper, which was the ‘C’ book. So that was the beginning. It was almost an accident. Then I had the idea of, “Gee, let me write twenty-six of these.” So, I discussed my idea with some editors at a publishing company in New York City. They said, “Great Ron! You've written three. Now write twenty-three more.”

Maxine: Our next question is about the inspiration for one of the story’s main characters.

Ayelet: Is Dink based on you?

Ron Roy: Oh gosh...yeah, I relate to Dink. But I also relate to Josh and Ruth Rose. I think parts of my personality are in all of them, but these are fictional characters. I wanted Ruth Rose because she's such a smart girl. And I wanted Josh because he's such a funny character. And I wanted Dink because he’s also smart, and kind of serious. I wanted that combination because I thought they could be good friends and that's the way it's turned out.

Maxine: Now we have a question about one of Green Lawn’s favorite pets.

Jack: Is Pal based on a real dog?

Ron Roy: No. Well, yes. Yes and no. How's that for an answer? I used to have a dog named Pal. So when I decided to introduce Josh’s dog into the series I named him after my dog, Pal. But the two dogs are different breeds. Josh has a Basset Hound and my dog, Pal, was a little white Bichon Frise dog — much smaller than Josh’s dog and looks very different. But I chose the same name.

Maxine: And Runa, who's 10, has a similar question about Green Lawn.

Runa: Is Green Lawn based on a real place?

Ron Roy: Yes, Green Lawn is based on a real place. Some years ago I was teaching school. I taught 4th grade at a school in Connecticut. The school was located on a big lawn so that no matter which window you looked out, all you could see was green green grass for acres and acres. That was right around the time I was writing The Absent Author, so that's where the name came from.

Well, now we know where the inspiration for Dink, Ruth Rose, Josh, Pal, and the town of Green Lawn came from. We also know how Ron Roy gets ideas for the mystery stories he writes.

Hopefully this Q&A segment will motivate your young writers to put pen to paper and craft their own imaginary world!

For more of this exclusive interview content, check out the full audio version here. Be sure to tune in on August 5th for the third season of A to Z Mysteries: Clue Club.

What is your favorite episode of A to Z Mysteries: Clue Club? We’d love to hear from you! Find us on all our social platforms – Facebook, Instagram, Twitter, and Pinterest – or email us at contact@pinna.fm.

Amy is a freelance writer and homeschooling mom to her tribe of tiny humans. She's fueled by coffee and the desire to do ALL. THE. THINGS. She blogs about all things motherhood at realtalkwithamy.com