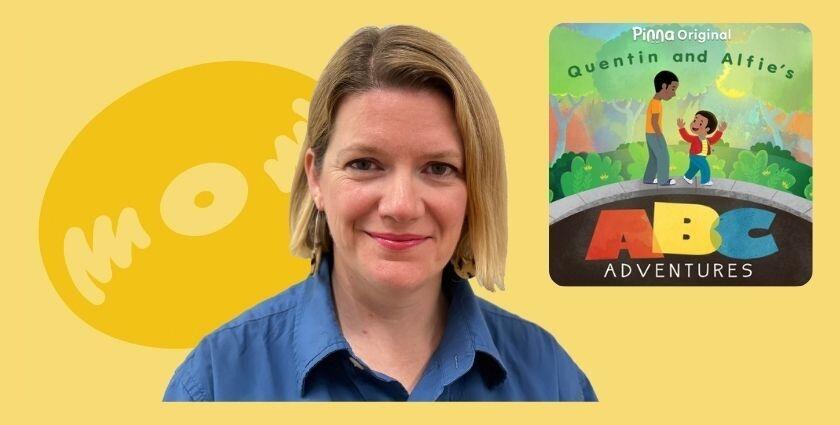 Get to know the creator of Quentin and Alfie's ABC Adventures

I’ve been working in children’s educational media in one form or another for over 20 years, and, if I’m honest, I’ve worked on more than my fair share of television shows, apps, and books to teach the ABCs. The alphabet is an essential part of early childhood, so of course there’s always a need to help kids understand and explore it. So when the team at Pinna approached me to create a new podcast series about the alphabet – the show that would become Quentin & Alfie’s ABC Adventures – the first question that came to mind was:

“How are we going to make the ABCs special?”

The second question was:

“How are we going to teach the ABCs when kids can’t see the ABCs?”

Luckily the endlessly creative Pinna team and our insightful and dauntless educational advisor, Dr. Julie Wood, helped me to sort that one out.

But the first question remained, and it was my responsibility to answer it. Why would a child be excited to listen to our show about the ABCs, when the ABCs are everywhere? For me, it came down to creating characters that kids would be excited to spend time with. If the characters led, the alphabet would follow.

I knew I needed a hero that kids could relate to, who could learn alongside them, and who could represent their point of view. As a mother of two sons, I was drawn to the idea of representing a sweet and enthusiastic little boy character in a world that sometimes feels like it pushes boys to be tougher or more worldly than their years – and I thought that preschoolers would also love being friends with someone like that. So I created the character of Alfie, a kind and openhearted boy who’s excited to explore the world around him and who loves helping others.

But Alfie on his own was only half of the equation. Little kids need teachers, people who believe in them, people who see their potential and encourage them to reach it. There are so many incredible teacher figures in kids’ media – from Mr. Rogers to Miss Frizzle to Bear from Bear in the Big Blue House (not coincidentally, the first show I worked on in children’s media). What kind of teacher would speak to today’s kids in a new and interesting way?

I thought about my own sons’ experiences and the people around them who have helped them learn, grow, and feel safe. One of the great things about watching my boys grow up in our Brooklyn community has been getting to know many amazing young men who work with and teach kids, becoming important mentors. There are incredible teachers’ aides, sports coaches, camp counselors, and after-school teachers who are cooler and more accessible than us fuddy duddy “grown ups,” and who bring enormous care and enthusiasm to their relationships with young people.

The more I thought about young men like the ones who have been such important forces in the lives of my own children, the more the character of Quentin took shape. Showing Quentin as a cool, exciting guy that kids would look up to who is also profoundly gentle and caring, started to feel like that thing I had been looking for, something that would make listeners excited and interested to follow these two wherever the alphabet would lead.

But characters on the page are one thing and finding the right people to bring those characters to life is quite another. Fortunately, from the moment that I heard Josiah Gaffney and G.K. Williams read together as Alfie and Quentin, I knew that we had something special on our hands. Their personal connection, the warmth and humor they bring to their roles, and the way they collaborate with one another made their characters’ relationship come to life.

When families listen to Quentin & Alfie’s ABC Adventures, I hope that they feel the resonance of that relationship and that broadens their idea of what a teacher can be. And I personally am so grateful for Josiah, G.K., and all of the people who I’ve gotten to collaborate with on this show – they are the friends, mentors, and teachers that have made the ABCs exciting and special again for me.

Pinna’s audio library is massive and offers something for everyone. Check out the ABC Adventures, or go on another audio adventure with thousands of podcast episodes, audiobooks, music & more!

Anne Richards is Vice President, audiyo-yo at FableVision Studios. You can learn more about her work at fablevisionstudios.com/audiyo-yo